In 1651, the directors of the Dutch East India Company (V.O.C.) decided to establish, at the Cape, a half-way house on the sea route from Holland to the VOC’s possessions in the East.

Jan van Riebeeck was appointed to command the proposed settlement. The three ships, Dromedaris of about 200 tons, the much smaller Reijger and a yacht, Goede Hoop, of about 40 tons, sailed from Texel on Christmas Eve, 1651.  They carried van Riebeeck and his family, and a company of 80 men, who were to remain at the Cape, together with all their needs.

The voyage was remarkably brief for that period, taking only three-and-a-half months, and the small fleet arrived in Table Bay and dropped anchor on 6th April 1652.

Despite many hardships and difficulties, van Riebeeck persevered against all odds and the small settlement took shape.  A fort and other accommodation were built, vegetable gardens were laid out and herds of cattle and sheep were built up by barter with the indigenous Khoikhoi. 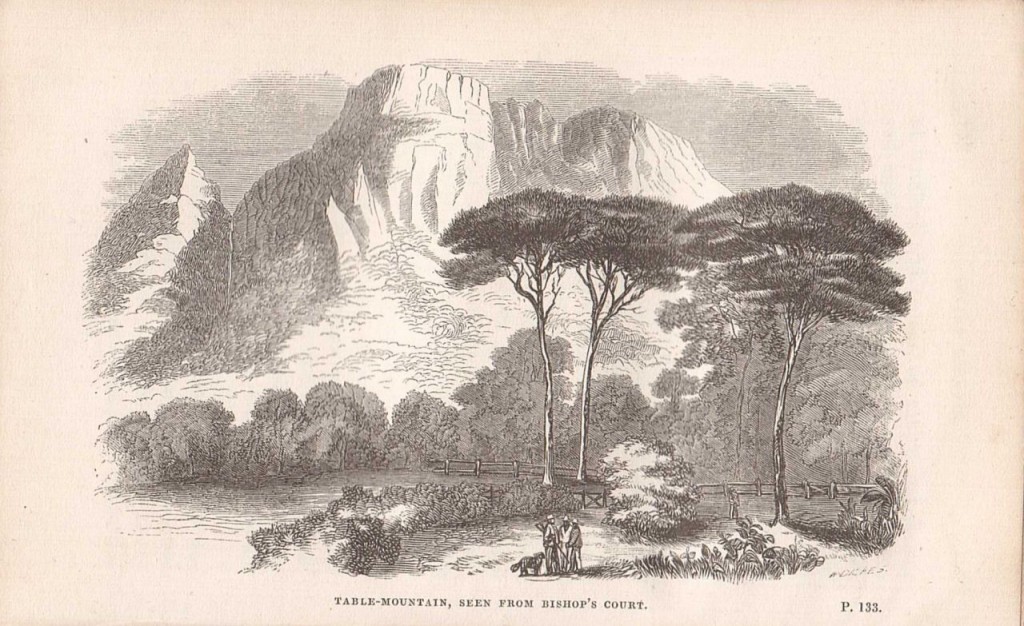 We are most fortunate that van Riebeeck kept a detailed journal, the original of which is lodged in the Cape Archives.  This was, of course, a requirement of the VOC.

It comprises about 2500 pages, and is written in old Gothic- Netherlands handwriting.  It was, with great difficulty, translated into English and the text researched and edited by Professor H.B. Thom, who prepared the footnotes. (A.A Balkema for the Van Riebeeck Society, Cape Town and Amsterdam 1952-1958. 3 vols).

The first mention in the Journal of the Liesbeek River, which, even today, defines the historical heart of Bishopscourt, appears on 14th and 15th July 1652, when it was still referred to as the Soete Revier (Sweet or Fresh River): “Again noticed many whales in the bay.  Went to the Soete River today….beside the Table Mountain….where we saw many harts and eland which had been observed before.  Resolved to set traps to try to catch them as, owing to their wildness, they are not to be reached with flintlocks.”

On 4th October 1655 the entry reads “In the morning the same strong S.S.E. winds. The Commander Riebeeck went behind the mountain in the neighbourhood of the forests to see whether these S.E. winds blew as violently there.  At the same time we wanted to examine the forests more closely to see whether timber could be obtained more easily from any nearer point…”

“The S.S.E winds were found to blow so gently behind the mountain that one hardly noticed them, while the clouds that lay thickly packed above the forest against the Table Mountain went cascading down its face causing very fierce gusts of wind in the Table Valley and the Table Bay in the neighbourhood of the fort and cultivated fields around it.  In the valleys behind the mountain, in the vicinity of the forests, we found the loveliest and most beautiful weather in the world; apparently this wind spends itself completely against the back of Table Mountain, causing a singular calm in those valleys, which have such rich, beautiful soil and are so well watered by pleasant rushing rivers of fresh water that they are a delight to the eye.  What a pity that through lack of men these valleys cannot be cultivated!…for the land is broad and spacious enough as well as suitable for agriculture.  An abundant supply of wood, stone, thatch and so forth, for building etc is also obtainable all around.” [The editor, Professor H.B. Thom, notes that “van Riebeeck’s discovery that the south-east winds do not blow so strongly in the vicinity of the Liesbeek River and that – as he mentions later on – the land there is exceptionally fertile, were the main reasons why he advised the Seventeen to establish free burghers there.”

By 1657, van Riebeeck had persuaded the Directors of the VOC to allow him to grant to some of the Company’s servants land along or in the vicinity of the Liesbeek River.  Known as free burghers, they were soon actively farming there under van Riebeeck’s strict control.

As Leo Marquard points out in his book, ‘The Story of South Africa’ (London 1955), “these nine free burghers and their families were the first real colonists in South Africa – colonists as distinct from Company’s officials.”

So it can be truly said that the colonisation of South Africa by people from Europe started in what is today Bishopscourt in close proximity to the house in which Archbishop Thabo Makgoba and all of his predecessors have lived.

Returning to the Journal, this records, on Sunday 2nd December 1657, that: “…three more men have asked for their discharge in order to cultivate a plot of 45 morgen, 15 morgen for each,…. Their request has been granted…to cross the river (the Liesbeek) to see whether they like the land on the other side adjoining that of the latest freeman Caspar Brinckman.”

On 4th December, it is recorded that the three men “Jacob Theunnissen of Cooltjesplaet, Pieter Visagie of Antwerp and Sigmon Janssen in het Velt, of Dordrecht, received their freedom for 20 years and 45 morgen…..15 morgen for each, to the east of the Liesbeek River below the Table Mountain and the Bosbergen, according to the deeds given to them.”

Professor Thom notes that Pieter Visagie was the ancestor of the Visagie family in South Africa.

A little known fact about the Liesbeek River is that its fish were an important source of food for the free burghers in 1657 and subsequently.

Following a number of thefts of cattle, van Riebeeck, on 15th July 1658, went to inspect some of the approaches to the settled areas which might be fortified in an attempt to inhibit this problem.  He concluded that “For this purpose the Liesbeecq (sic) river seems to offer a favourable barrier: it can be forded only at a few places because of its depth and general marshiness.  We therefore believe that if a little trouble were taken with it the cattle could easily be stopped there.”

On 24th July 1658 van Riebeeck again visited the area as far as Bosheuvel to examine the Liesbeek river as a barrier to stop cattle theft.  He believed that those involved “could be stopped or warded off below the Liesbeecq River near where the Company’s forest is situated opposite Vasagie’s (sic) house and farm.”  He also wished to inspect “from beginning to end – all the shrubs, water plants*, reeds and marshes, whenever a favourable opportunity presents itself.”

*Prof. Thom notes that water plants = ‘Lies’ and the Dutch word ‘beek’ = brook. Hence the name of the Liesbeek.

Van Riebeeck continued his inspection on 26th July 1658 “to examine the forest stretching from the mountain to the Liesbeek River and also the river itself, and found the forest so dense from the top to the bottom, close to the river that no opening could be found except the wagon-road made for the freemen, which could be closed by means of a bar. No cattle could therefore pass through this wood…..It is about 2 hours distant from the fort, as far as Vasagie’s dwelling, just below the foot of the Bosheuvel. ….the Liesbeecq River could with little trouble be made navigable for small boats from the fort and through the Salt River to this spot.”

A chart of the free burgher settlement as at 1658 can be found here.

On 21st August 1658 van Riebeeck visited all of the freemen, and in addition to offering each of them a number of cows, he also offered “as many vines also as each wished to plant in his lands or against his house.”  One or two took up the offer to plant against the house, but none was willing to plant vines on their lands.

Accordingly, the Journal notes, “The Commander consequently intends to plant a large part of the Bosheuvel with young vine shoots during the waning moon which is the correct time.”

Prof. Thom notes that “The Commander’s farm at Bosheuvel – today Bishop’s Court – soon became one of the finest farms of the day.”

The Standard Encyclopaedia of Southern Africa (SESA) Cape Town, 1970, records that the historic farm BOSHEUVEL, “was granted in 1658 on loan by Commissioner Johannes Cunaeus to Commander Jan van Riebeeck.  It is now known as Bishopscourt, after the official residence of the Anglican Archbishop of Cape Town.  For 280 years the farm retained its original borders, which enclosed slightly more than 211 acres when granted to van Riebeeck.”

Of Bishopscourt, the SESA records this: “Official residence of the Anglican archbishops of Cape Town.  It was purchased in 1851 by Robert Gray, first bishop of Cape Town, who had leased the property since 1848.  The estate, comprising 213 acres, stretching from the banks of the Liesbeek to Wynberg Hill, was granted by the Dutch East India Company to Jan van Riebeeck, who called it Bosheuvel.  He planted a hedge of wild almond trees in 1660 to mark its top boundary, and this….has been proclaimed a historical monument.  The estate changed hands several times in the 18th century, and in 1783 the purchase price increased from 400 pounds to 2,267 pounds, which probably indicates the erection of the present house with cottages and slave quarters.  In 1805 it was purchased by Honoratus Maynier, whose tomb is on the estate.  He changed the name to Protea, and after his death it was occupied by Sir Lowry Cole in the 1830’s.” [Governor of the Cape Colony, 1828-1833, supervised the abolition of slavery].

“Bishop Gray gave it the name Bishopscourt.  The original estate was broken up in 1937, and only the house and 16 acres was retained.”